The Launching of a New Church 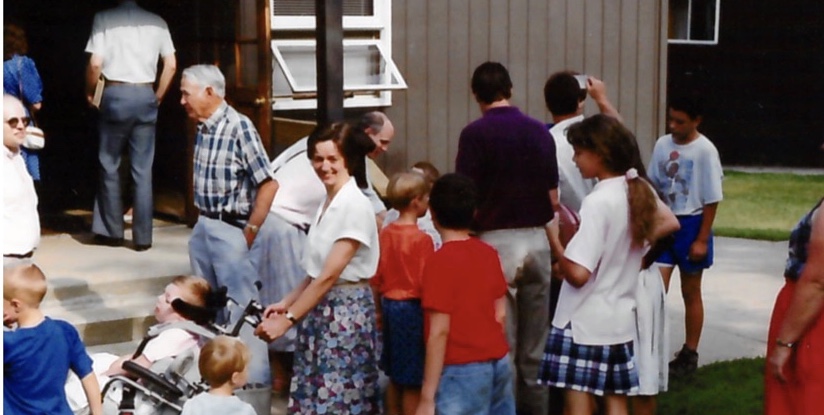 Cornerstone Bible Church was launched from Fellowship Bible Church on Father’s Day of 1993 and held its first Sunday morning service the following week, 25 years ago. The core members of the church began meeting in January of that same year to pray, plan, and reach out to the community. Pastor Lud and Mur Golz had the original vision and began praying for this process much before that with a vision to reach others with the love of Jesus through a church plant instead of expanding Fellowship’s current building or adding another service. Pastor Golz shared his vision for a sister church with current elders and leaders of the church, Jim and Mary Byler, Alan and Deedy Unagast, Kevin and Noreen McNeeley, and Lee and Debbie Barthlemes. Those couples, as God had arranged, had been already thinking about this possibility even before talking to Lud. As those couples met to pray together about this adventure, they invited Roger and Glenda Kruse, Dan and Min Itschner, and JR and Michelle Miller, who were also attending Fellowship regularly to join them in this exciting journey.

Why a church? And why now? Pastor Golz and the core members had a heart to reach the communities of eastern Geauga area with the love of God and with the message of the gospel. Each member was driving around 20-30 minutes one way to church. Having a church in the Middleifeld/Burton area would allow outreach to neighbors, family, co-workers, families of kids on a baseball team, or people that one meets regularly at a school event or a grocery store. Potluck community dinners were planned regularly in the area on Saturday evenings in the Troy Community Center and at Camp Burton to first see if there was an interest and need in the area for another church. People came and people returned. Roger led us in a time of the Word and prayer. Relationships formed. In fact, we shared among each other a light joke of naming the church Potluck Bible Church. Though we knew this would never be the official name, the community and belonging in the connotation of the name were at the heartbeat of the mission of the church. The members had a desire to reach those who knew God already and help them grow in the love of God and His word and to reach others in the community with the good news of the gospel of Jesus through every day relationships.

As we continued planning and reaching out to the community, we needed a name. After prayer and discussion, the choices were narrowed down to two. And by a vote of the team of 14, Hope Fellowship Church was decided upon. Within a few weeks, if not days, another church in Troy choose a very similar name. So Cornerstone Bible Church became our name, a name that was agreed upon by all, because of the connection of the name to our sister church, Fellowship Bible Church, and because it was the desire of the core group that the Word of God would be the “cornerstone” of the church, both in our lives individually as well as corporately.

Roger, an ordained minister, and Glenda Kruse had been serving as missionary/evangelists in India with OMS for many years.  The medical needs of their son Wade, who contracted spinal meningitis after he was born and then cerebral palsy brought them back to Solon, Ohio, the Cleveland Clinic, and to Fellowship Bible Church, where they were supported as missionaries and were building friendships. As Roger emerged within our core group and at our outreach events as our spiritual leader, he was eventually named as our founding pastor. Each man of our group eventually became a founding elder of the church and each couple as a core founding member.

The team proceeded meeting together regularly, with Lud and the elders of Fellowship, attending conferences, and reading books about church planting. Church values and our constitution was created. The deliberate choice was made to make Cornerstone a family focused church.  Now it was time to start talking about finances. Without money, a church could not be planted and ministries could not sprout.  Once research was done and Roger’s base salary was determined, it was time for the core group to pledge their monthly tithe amount. Sitting in Jim and Mary’s living room, each couple wrote their monthly amount on a piece of paper, the hat was passed and the amounts were totaled. We had the right amount to proceed in employing Roger part-time in April and full time in June when we would launch. It was a very specific moment in seeing and sensing the presence and blessing of God on our team and this process.

So we switched our tithing from Fellowship to Cornerstone. Roger started as our part-time pastor prior to our first services, and then went to fulltime.   His first office was the family room of JR and Michelle Miller, where he could use the computer and make phone calls. Roger and Glenda began searching for a home in the Middlefield/Burton area for their family. The founding group also began searching for a building that could be rented for Sunday mornings.

God made this process such a precious time of faith and trust for the core members, and for many others as well.   The hand of God was evident in so many ways, providing for the spoken and the unspoken needs. The entire process was such a positive experience, starting as a vision of outreach of Pastor Golz. When we reached our launch from Fellowship on that Father’s Day of 1993, Fellowship was about to lose the involvement and leadership of many key families and elders, part of their congregation, as well as part of their financial support. It was a step of faith for all involved, both at Cornerstone and Fellowship. And, as excited as the team was, that final Sunday at Fellowship was a very difficult and an emotional day.

In fact, when Pastor Lud asked for all those who were going to be attending Cornerstone to stand to be recognized and prayed over, there were members of the congregation who had not yet made their final decision about where they would be worshipping that next Sunday. So we stood, some making that decision right there, and received the blessing of Pastor Lud, the elders, and the congregation of Fellowship Bible Church. Some of the couples and families that stood included John and Jan Hoffart, Dave and Debbie Barthlemes, Dale and Lynne Nelson, and many others.

After that very special service, we then had to walk out the doors of our beloved church. Our church was now Cornerstone Bible Church. The core team met that afternoon on Kevin and Noreen’s deck, together, not only to reflect, to pray, and to prepare for our first service, but to gather as a family unit during this exciting time of faith and trust in launching our church.

On June 27, 1993 Cornerstone Bible Church met for its first formal Sunday worship service at Camp Burton in Len Hall. During that summer, Sunday school classes were sometimes held on picnic tables around the camp. We continued to meet there for a few months, until we started meeting at Berkshire High School in the fall of 1993. Our worship services included a time of worship, prayer, and a message from the Word. Dan Itschner led us in worship with his guitar. Mary Byler prepared our weekly bulletins. JR Miller served as the incoming and outgoing secretary. Kevin and Noreen started our nursery. Lee and Debbie taught our youth. Alan Unagst handled the many legal processes of a new church, to name a few of the specific roles.

The body of Christ came together in both practical and spiritual ways. Other ministries soon emerged included youth group, kids’ talk, men’s and women’s breakfasts, and women’s bible studies. God provided during those first weeks and continued providing people who served Him by serving others in various roles as the church grew: teachers, nursery workers, youth leaders, musicians, women’s bible study leaders, and in so many other roles.

Hopefully this gives you glimpse of how Cornerstone Bible Church began 25 years ago. There’s so much more than can be written about its beginnings but also about what God has been doing within our congregation up until this point. But all of this is just a small part of a larger story, the story of God’s redemptive work throughout history.

At one point in history we were all enemies of God, hopeless and helpless, enslaved to sin and Satan. Separated from God and in desperate need of a Savior. We needed to be set free, forgiven, and redeemed. That’s when Jesus stepped into this world as the perfect Son of God to rescue us from our sin. Jesus lived a perfect life and then went to the cross in order to defeat sin, Satan and death. And through faith in Jesus Christ, that fellowship and relationship with God can be restored.

That is the bigger story that Cornerstone Bible Church is seeking to point people to on a regular basis. Sin was paid for, Satan was crushed, and death was dealt a final blow. Now through Jesus Christ we are free, forgiven, loved, and more than conquerors!

As excited as we are to celebrate 25 years of ministry, we are even more eager for the future to see what God has in store for us in the coming years. We want to give the glory to God for allowing us to be part of advancing His kingdom here in NE Ohio and we are eager to see the gospel continually proclaimed with Jesus Christ being lifted on high within our community for generations to come.

Please pray for our church! We desire to be faithful to the work of the ministry that God has called us to. We pray that more and more people would come to a know who Jesus Christ is, that our congregation would grow toward maturity, and then go out into the world to be used by God to reach others with the good news of Jesus Christ.

God has been very good to us these past 25 years and we pray that He would praised and glorified in the many years ahead.